WALK THE TALK ARCHIVE
Visit this dedicated website, created by Rob Ochshorn, which provides on-line access to the 76 people whose real-world accomplishments — from 1970 until 2022 — have been celebrated in Walk the Talk.

Walk the Talk is no ordinary walk. It’s a biannual parade!
LA Poverty Department brings Skid Row to life with performances along the parade route that pay tribute to neighborhood initiatives and the men and women whose contributions to the community call for a big, blaring celebration!

Why Walk the Talk

In 1976, an amazing, enlightened moment of LA city governance occured when a zoning plan was put in place that preserved the biggest stash of low income housing in Los Angeles County — in other words, instead of bringing in the wrecking balls, it preserved the Skid Row neighborhood. In the nearly 50 years since then, most of that housing has been taken out of slum lord hands and is now owned by non-profits who have renovated existing buildings and created new ones. Other non-profits and social services have located there. And importantly, the long-term permanent residents of the neighborhood have made mighty contributions toward preserving the neighborhood and making it livable. It was Skid Row residents who got City Council to enact a moratorium on hotel conversion, during the height of the early 2000’s real estate bubble feeding frenzy. It was Skid Row residents who started providing trashcans and cleaning up the streets, when the city wouldn’t. It was Skid Row residents that got the Parks Department to reinvest in Gladys Park. Skid Row residents envisioned the ReFresh Spot.

Right now, there are dueling narratives about who comprises the “downtown community,” new residents claim that they are creating community downtown, but, often without understanding the accomplishments of the long term Skid Row residents. Walk the Talk is intended to highlight these achievements while fostering an understanding of how Skid Row people and institutions contribute to the wellbeing of the entire city. As the site of many groundbreaking solutions to intractable social problems, Skid Row is a valuable social incubator for communities everywhere.LA Poverty Department began chronicling the social history of Skid Row with its 2002 month-long installation, “Is there History on Skid Row?” at 112 Winston Street. This was followed by our 2008 gallery exhibition “The Skid Row History Museum” at The Box Gallery. Our chronicling of the neighborhood’s achievements continued with our first Walk the Talk parade and conversations in 2012 and continued with our 2014, 2016, 2018 and 2020 Walk the Talk parades.

In 2014, we decided to start The Skid Row History Museum & Archive, for the same reason we started Walk the Talk: as a bulwark against the displacement of Skid Row. The materials assembled in the archive, including the interviews with each Walk the Talk honoree, are enormously powerful in setting the record straight and preventing misrepresentations of history and current events. The entire collection of Walk the Talk, including interviews and performances on each of the 76 honorees is available on our dedicated Walk the Talk website.

[T]he collective acts as curator and archivist of their neighborhood. Homeless communities are barely acknowledged by most institutions, much less thought to have histories and textured pasts. The LAPD turns that generalization on its head, pointing to the area’s ‘amazing community assets.’ — Ryan Wong ARTslant (2014)

WALK THE TALK is the continuation of a 10 year process of community engagement including performances, exhibitions, public conversations, interviews, drawing, writing, singing and improvising. The conception of this project is to honor people who live and work on Skid Row and who have made it one of the most significant areas for solving the problems that other people have given up on. One of the original goals of Los Angeles Poverty Department is to create community on Skid Row and to employ the voices of the people who live on Skid Row to communicate the experience of living there to the larger community of Los Angeles and to the nation. This project started in 2002 with the LAPD installation / performance series Is there History on Skid Row? and continued with 2006 to 2011 activities: UTOPIA / dystopia where, in preparation for the performance, LAPD created events that engaged community brainpower to identify initiatives and people who had made positive contributions to the neighborhood. We invited some of the most widely recognized social visionaries from the neighborhood, and they were asked to speak about other people and initiatives that they valued. The input led to the installation, Skid Row History Museum, at The Box Gallery, which included more performance and public conversation events, to solicit further community input. 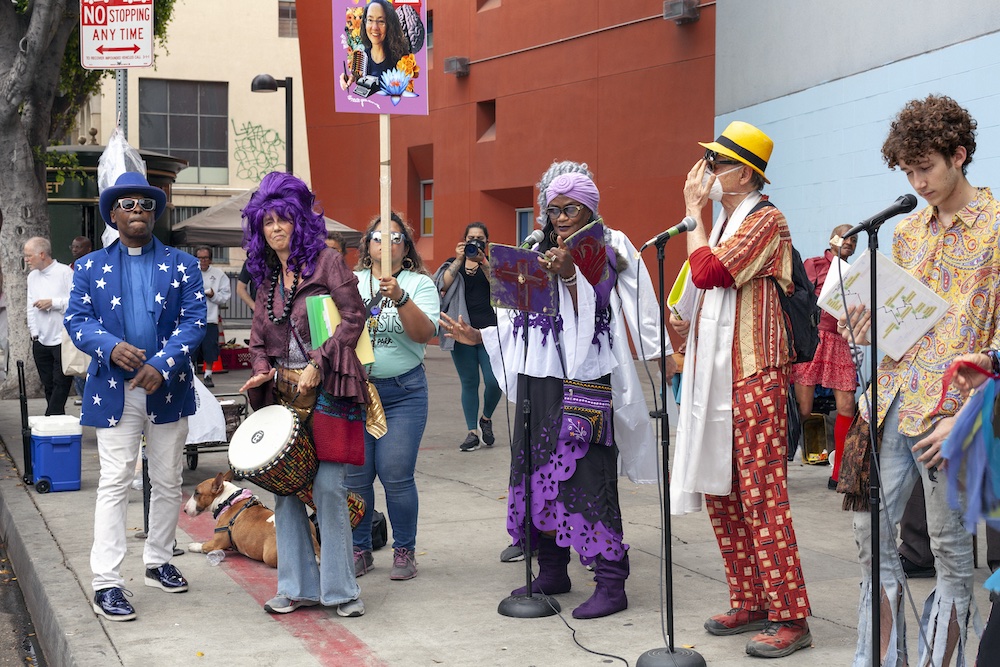 Walk the Talk parade & Come Together

Los Angeles Poverty Department honors eight community members with performances along the parade route, based on their interviews with BLOW brass band and portraits by Dakarai Akil.


THIS YEAR – because of COVID_19 – we celebrate 8 honorees with new performances and portraits by Man One all wrapped inside the publication of our WALK THE TALK WEBSITE. The website, created by artist / technologist Rob Ochshorn, includes: hour-long video interviews and transcripts of the interviews, for each honoree as well as videos and scripts of the scenes distilled from the interviews and performed by Los Angeles Poverty Department in each Walk the Talk performance / parade.

We published a book with this year’s honorees.
Order the book for $20 here.

Walk The Talk parade & Come Together

Eight additional Skid Row visionaries celebrated in a PARADE with PERFORMANCES and a mobile EXHIBIT about Skid Row’s history inside the MIKE KELLEY Mobile Homestead, stationed at MOCA from May 29 – June 16. Portraits of the honorees created by Brian Dick.

36 Skid Row visionaries were celebrated with 3 DAYS of PARADES and PERFORMANCES with PARADIGM BRASS band, traveling 3 routes through the Skid Row neighborhood with portraits of honorees created by Mr. Brainwash.