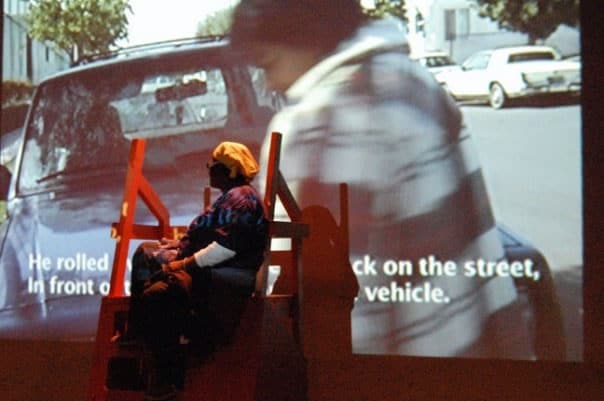 I’m Robert the Life Guard.
I’ve been a lifeguard for 30 years.  I was a Navy Seal, swam 12 miles every day.  In 1978 I rescued a Russian diplomat off the coast of Catalina.  It was in the newspaper.  The Russian was 84 feet under in a diving bell.  I swam a quarter mile with him before we were picked up.
I jumped from the lifeboat. When I got to the Russian he was down to 300 lb of air. I had 2 tanks on my back with a combined 1,000lb air. I dropped the Russian’s weight belt, and using buddy breathing, started to bring him up.
Coming up, a shark attacked…

Now we don’t sleep West of Lincoln anymore…
I’ve seen a lot of changes in Santa Monica over the last 13 years. 13 years ago they fed the homeless in the park every day. You could sleep anywhere you wanted.  On the beach, in the park, in the alley.
It was a very liberal city here in Santa Monica. Good for the mentally ill.  You could go to a restaurant and they would give you food. Good food.
You could hang out at the corner. In the parks: there are 25 parks in Santa Monica.
We all knew each other. It was like a community. The police knew you and they would leave you alone.
Downtown Santa Monica is everything West of Lincoln and between Wilshire and the Pico Blvd. All the services for the homeless are there.
But now also all the multi-million dollar homes, the new hotels, and fancy apartment buildings are there. And they want the homeless out.  The prices have gone up so enormous that the people who were born and raised there cannot afford a house anymore and some are homeless themselves.
If people don’t like you on their property the police come and tell you that you keep the people from getting their services. You cannot sit in a doorway, an alleyway or on the side walk.  You cannot sit in Palisades Park.
Santa Monica has changed: it used to be a community of elderly and now it’s rich people.
Now nobody knows their neighbor anymore.  It’s a big city mentality.  It’s fear.  They take it out on the homeless. They want to protect themselves, so, more and more rules exclude the homeless.
Now we are pushed this way. Nobody used to sleep here, but now YOU DON’T SLEEP WEST OF LINCOLN anymore…

SANTA MONICA CHRONICLE – “HEADS in the SAND”
Dear Editor,
Since December 2008, I have warned City Council that people will be injured and killed at the Main Public Library because the city refuses to insure public well-being and safety.
Because the security is lax, it is possible to take large packages into the building.
Library patrons have witnessed persons entering the Main Public Library with unchecked large bags and suitcases, some weighing as much as 100 pounds.  They could contain explosives, chemicals, radioactive materials, or other weapons of mass destruction, as well as conventional weapons, in addition to drugs and alcoholic beverages…

RW
I was going to community college and I had a girl friend there.  She died a few years ago now.  But she had three children, three girls. Children, you tell them what to do, but they’re gonna do what they see you do.  I paid attention to them, made sure they did their homework.  I helped them do it.  I set an example for them to follow.
All those 3 girls turned out good. 2 have masters degrees. One has a business in Arizona.  The 3rd drives a bus.  I saw her on the bus a few years ago.  She recognized me. ‘Is that you RW? I’m so glad to see you!’ She told me, it was me that they all remember as being the one who made them turn out right.
The things that are important, they really don’t cost anything…

Sheba
I was homeless in Hollywood.  I was hungry, so I was walking to panhandle where there are lots of people.  I was crossing the bridge over the Hollywood freeway, near Denny’s. I passed a woman standing with her back pressed up against the fence.
“What are you doing here?”
She said, “I’m thinking.”
“OK maybe I’ll come over there with you.”
“You better not do that, cause I’m thinking about jumping.”
While she was talking, she put her hands up top and started climbing over the fence.  She was climbing, but all the time she kept looking at me.  I realized she was really gonna do it.  So I tried to think of things to talk her out of it. Then she started taking her clothes off.  “Don’t do that.”
“That way if I jump, at least someone will have seen me naked.”
She tossed her blouse back over her shoulder onto the freeway.  She was still looking at me. I made a joke:
“Don’t do it. They might just run right over you–cause you don’t look so good naked.” She laughed: “You’re right.”
I thought I’d talked her out of it. Then she said: “I think I’m gonna jump anyway.  But, I don’t want you to see me, so turn your head.”
“Why?”
“Look away cause I’m gonna jump.”
“Don’t do that.”
“Just go.” …

At a time when home foreclosures, job loss, and staggering medical bills are forcing more and more people onto the streets, undercover LAPD (Lost And Presumed Dead) heroes share the extraordinary wisdom that accounts for their return-from-the-edge, against-all-odds survival.

The project included visual collaboration with Otis Integrated Learning program’s: Linda Samuels, mentor Dorit Cypis and the students in her class ‘The Right to the Street’.

“CPR: a Public Training in Life Saving Skills” is the first collaboration between LAPD and Ocean Park Community Center. Project partners include LAPD, OPCC, 18th Street Arts Center and HIGHWAYS. This project was funded in part by a grant from The National Endowment for the Arts’ Theater program.