Los Angeles Poverty Department’s
“Skid Row History Museum” was installed
at The Box Gallery in Chinatown
from June 28 through August 2, 2008.

This museum is temporary and is a planning phase for a permanent “museum” in the form of a series of public artworks that would acknowledge the cultural contribution to the city of people who have lived and worked in Skid Row LA and recognize the history and shifting contours of the area. A major part of this exhibition are events that will include public discussions with key figures of the Skid Row community, musical and dramatic performances and workshops for Skid Row residents.

Recognizing that the contours of the Skid Row and downtown Los Angeles have always been dynamic, the museum will include history and events outside the recognizable boundaries of Skid Row today — and illuminate the social dynamics and public policies that have and continue to shape the area and public perception of the area.

Skid Row is an amazing place with amazing community assets.  Skid Row LA has the largest concentration of the most affordable housing in Los Angeles County, Skid Row is the biggest recovery culture anywhere. Skid Row’s highly developed drug recovery consciousness includes free recovery programs and numerous AA, NA and CA groups. Skid Row has the largest concentration and most comprehensive set of services for homeless people in LA County.  In short, the community has long been a generative site for visionary answers to social problems.

These visionary initiatives have come about through individual and collective concern by community members and moments of enlightened public policy and visionary non-profit efforts. Largely under appreciated, is the extent to which the visionary efforts have been the work of community members. Without the civic engagement of citizens of Skid Row, the housing stock would not have been preserved, the people and social services would have been dispersed and the Safe Haven recovery community would not exist.

This show “The History of Skid Row Museum” is meant to highlight the cultural, civic and political initiatives and the community people that made them. This ‘museum show” is a dynamic process. During the course of the show we want to hear of additional people and initiatives. During events connected with the show and in the gallery there is space for you, the public, to contribute your knowledge of special people and initiatives.

Eventually the “museum’ will be housed out of doors as a series of public artworks and plaques commemorating people in the places where they lived and worked.  We invite you to suggest people and designs for these plaques. At the moment we are thinking of something like an alternative to “walk of stars”→  because while these people are stars, their concern for the well being of their community means that they are exactly not about setting themselves apart from everybody else, but rather about raising everybody up together. Enjoy the show and help us figure all this out. 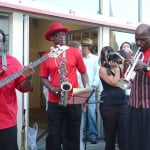 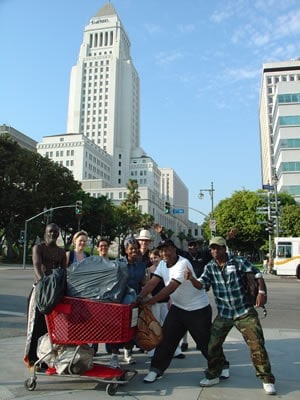 FREE SHOPPING CARTS
Periodically the LA Police Department has made life difficult for people by claiming that their shopping carts were “stolen property.”  The L. A. Catholic Worker buys shopping carts and gives them away to people who want them.

SIDEWALK OUTSIDE — DESIGNATED SLEEPING ZONE
Another example of the resurgence of the 41.18d mentality. In 1997, in an effort to make 41.18d legal, certain areas were designated as “sleeping zones.” If you slept there —and disappeared by 6 am— the promise was that you would avoid police harassment and possible arrest. Jim Hahn was LA City Attorney from 1985 to 2001 and he consistently refused to prosecute the homeless for sleeping outside unless the City provided them with an alternative. Hahn’s principled and reasonable stand had a number of unintended consequences that included not only 1997’s “designated sleeping zones,” but also the infamous “Urban Campground” opened by Mayor Tom Bradley in 1987, on a dusty lot at 4th and Santa Fe, by the LA River. More on the Urban Campground, in the timeline and resource table located in the back room of the gallery. 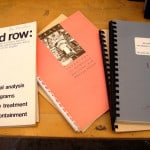 PULL UP A CHAIR
The resource table is there for two reasons: to give you more information and to activate you to throw in your own two cents (and gazillion bucks) worth of ideas for plaque designs and worthy recipients. The resource table includes in-depth written material on the history of Skid Row and on initiatives featured in the show and other equally worthy Skid Row initiatives. There are artifacts in the form of ﬂiers, notes, etc. Other books on the resource table include a book of shapes and examples of other commemorative plaques from other places. The large book is for you to write and draw your own commemorative plaques.

COMMEMORATIVE PLAQUES
3 possible designs for commemorative plaques honoring people and initiatives in Skid Row. The 3 represented in these mock-ups are all worthy honorees — but at this point they are only possible honorees. Each, in his or her own way, contributed to important advances in the neighborhood: decent housing, recovery and community empowerment. We don’t know how many initiatives and people will be honored or who they will be. We don’t know what the design will be either. We want your ideas on people and initiatives and on the design.
Open 3 possible designs: plaque_designs

RESIDENTIAL HOTEL
Veronica Doleman of LA Community Action Network (LA CAN) made a model of an affordable hotel and its happy tenants. The hotel made a statement about the need for an ordinance to preserve affordable residential hotel stock, in a time of “adaptive re-use.” Veronica’s hotel model was one of LA CAN’s contributions to the monthly Downtown Art Walk. Largely through LA CAN’s ability to bring together hotel tenants to advocate for their own interests, the LA City Council recently enacted legislation to permanently preserve the affordable hotel stock. On video Veronica, Steve Diaz and other LA CAN members talk of their efforts to prevent the displacement of the long time resident community of downtown. 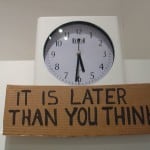 IT’S LATER THAN YOU THINK
This is a recreation of the television at Another Planet, an outdoor community arts center started at a former gas station by Clyde Casey, (pictured, at right) at the southeast corner of Wall and Boyd Streets on April 15, 1988. Another Planet burnt down a little over a year later, in the summer of 1989. Also recreated from Another Planet, is the suspended planet being watched over by a cupped hand. Much more on Another Planet is in the notebooks on the resource table. In keeping with the futuristic spirit of Another Planet, the “It’s later than you think.” monitor features images and text on many more possible  commemorative plaque honorees.

4118 D SIGNS
This law, enacted in 1968 to disappear Hippies from Hollywood Boulevard, has been periodically dusted off and utilized to harass, displace, arrest and or separate homeless people from their belongings. Every time it’s been dusted off, it’s gotten itself in trouble with the law: the Courts and the Constitution of the United States. In September 2006, Judge Kim Wardlaw of the 9th District Court of Appeals wrote that the LAPD cannot arrest people for sitting, lying or sleeping on public sidewalks in Skid Row as such enforcement would amount to cruel and unusual punishment because there are not enough shelter beds, and Judge Wardlaw concluded that prohibiting homeless people from sleeping on the streets was a violation of the 8th Amendment which bars cruel and unusual punishment. The judge told LAPD and the City to reach a settlement with the ACLU. LA City Council put off settlement for a full year, reasoning they could continue to enforce 41.18d until a settlement was reached. Nevertheless its proponents have trotted it out again and again, each time tweaking it, in hopes of making it constitutional. It hasn’t happened yet. A number of these failed attempts are documented in this show. They stand in counterpoint to the rest of the show which celebrates effective policies and individual and group initiatives.

COMMUNITY ASSETS
A big wall including only some of the many, many people and initiatives creating community on Skid Row and Skid Row adjacent real estate. In April 2007 los Angeles Poverty Department initiated its UTOPIA/dystopia project , seeking to ﬁnd out how ﬂesh and blood people living and working downtown envision the future of downtown and what kind of downtown they would like to be a part of. This instead of being told what people want by newspapers, political leaders and developers.

Funding assistance for this project has been provided by the Community Redevelopment Agency of the City of Los Angeles (CRA/LA).

About CRA/LA Art Program:
CRA/LA has had a long-standing commitment to the arts, recognizing that they play a significant role in the revitalization, growth and sustainability of our neighborhoods. Beginning in the late 1960’s, CRA/LA became one of the first public agencies to set the groundwork for other cities creating policies that require developers to invest in art and culture. In the 40 years that we have invested in Downtown LA we have helped create over 100 traditional and contemporary pieces of public art and cultural facility projects. Highlights include the development of the Museum of Contemporary Art, rehabilitation of the historic neon on Broadway’s theaters, and many engaging site-specific public art installations in private developments, streetscape improvements and parks.