“The Take” – Free Movie Nights At The Museum 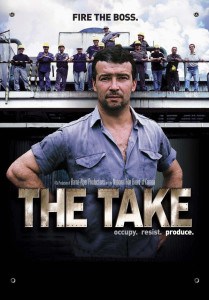 Film synopsis
This documentary tells the story of thirty employees who – in the wake of Argentina’s dramatic economic collapse in 2001 – walk into their factory, roll out sleeping mats, and refuse to leave. They’re part of a daring new movement of workers who are occupying bankrupt businesses and creating jobs in the ruins of the failed system. But their success is far from secure. Like every workplace occupation, they have to run the gauntlet of courts, cops and politicians who can either give their project legal protection or violently evict them from the factory.

Followed by a discussion with Mary Sutton, and Kayla Al-Shamma Jones

About our speakers
Mary Sutton is life-long activist with a strong commitment to social and economic justice. She has been active in the movement to stop prison and jail expansion in Los Angeles for almost a decade, and has pushed for available funds to be used to build community-based solutions. Sutton is completing her M.A. in Urban Sustainability at Antioch University Los Angeles with a focus on incarceration. For her final capstone project she has designed Collective REMAKE: Art, Business, Education, News, People & Recycling for Sustainability. Collective REMAKE will support the creation of worker cooperatives with people who are disenfranchised by incarceration. Sutton is a Board Member of the Fair Chance Project and active in the Global Women’s Strike. She is also a single mother of two grown beautiful daughters.
Kayla Al-Shamma Jones is the founder of the Democracy @ Work – West LA and an advocate for economic justice. In 2014, a medical crisis – and the birth of her daughter – caused her to leave her corporate job and pursue a life of activism. In addition to working with Democracy @ Work, she works as a digital marketer/customer service representative for several local small businesses, and when she’s not changing diapers, she writes leftist fiction.

Free Movie Nights at The Museum
Free movie screenings, free popcorn, free coffee & free conversations. Every 2nd and 4th Friday of the month at the #skidrowmuseum we screen movies about issues that are important to our Skid Row and downtown community.