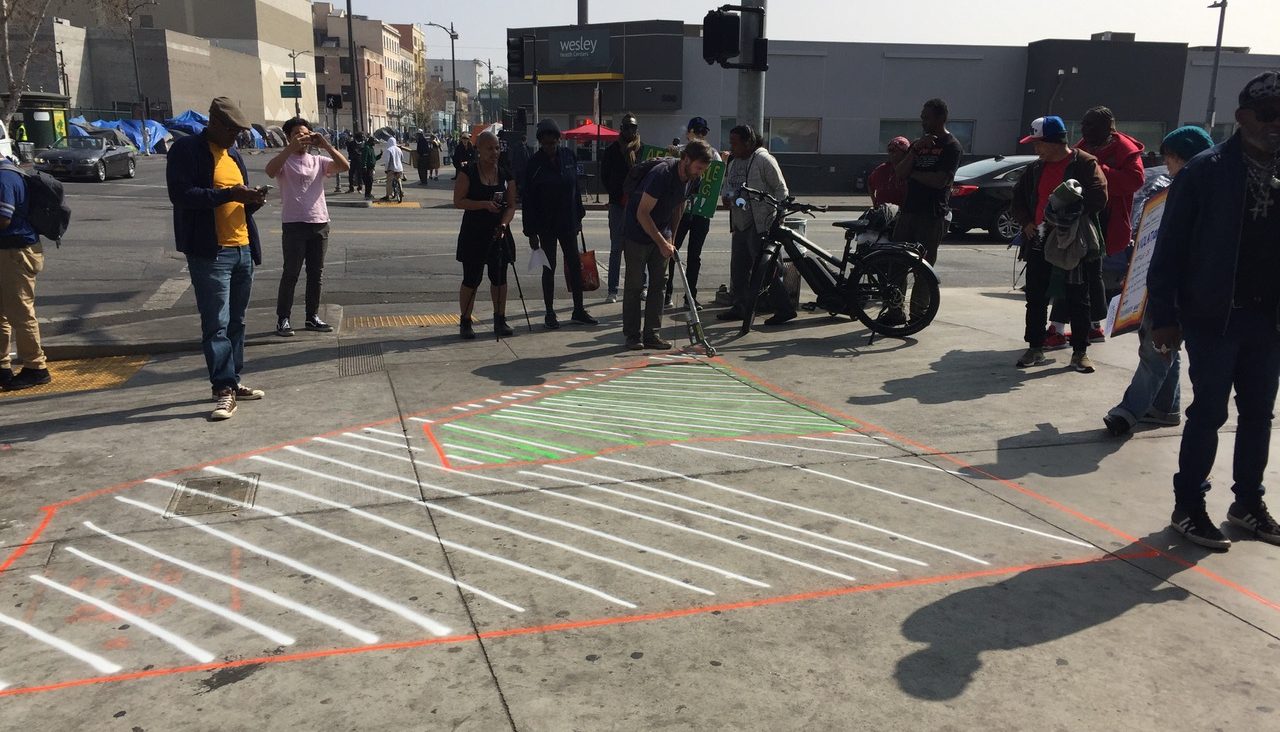 Skid Row Now & 2040 is a coalition of Skid Row grassroots groups and residents, including Los Angeles Poverty Department, United Coalition East Prevention Project, Los Angeles Catholic Worker, Los Angeles Community Action Network and other Skid Row residents and leaders that has been in dialogue with the Los Angeles Department of City Planning, the City’s Planning Commissioners and City Council for the past five years, as the City has been developing its new zoning and downtown community plan, DTLA2040 Community Plan, that will go to City Council for approval in the near future. The Skid Row Now & 2040 coalition was formed to ensure that the concerns and vision of current Skid Row residents are incorporated into the City’s plan. While many of Skid Row Now & 2040’s concerns, articulated by Skid Row residents and workers, have been incorporated into the DTLA 2040 Plan, more still need the City’s attention. The unique history of Skid Row, which includes previous planning decisions that saved the low-income housing in the neighborhood and prevented displacement, remains as important today, as the City grapples with creating housing and neighborhoods for people currently unhoused.

SUBMIT A PUBLIC COMMENT TO THE PLANNING AND LAND USE MANAGEMENT COMMITTEE:
1. Type DTLA 2040 in google-type search engine
2. Click on the one that says Downtown Los Angeles Community Plan Update.
That link will take you to their page and after several paragraphs you’ll see this paragraph:
Members of the public who wish to offer public comment to the PLUM Committee may submit written comments about the Downtown Community Plan Update online; the Council File number is CF 22-0617.
3. Click on the word “online”, add the number 22-0617 and fill out the rest of the form including your comment. You have a maximum of 5,000 words for your comment which will be sent to the Planning and Land Use Management (PLUM) committee.

Community Strategy Meeting on October 6, 2022 @ the Hippie Kitchen garden
The Skid Row Now and 2040 coalition is happy to present our GREEN PAPER, an advocacy report in response to the DTLA 2040 plan which is now moving to the Planning and Land Use Management Committee and will soon land at LA City Council for approval.

Los Angeles Poverty Department dedicated serval projects to the new zoning plans and the consequences they will have for the Skid Row community. See: The BACK 9, Golf and Zoning Policy in Los Angeles and How to House 7,000 People In Skid Row. And an exhibition about Skid Row’s efforts to have representation in the decisions that are made about its community: Zillionaires Against Humanity: Sabotaging the Skid Row Neighborhood Council.

As a result, the Department of City Planning created a special zone where only affordable housing with extremely low and deeply low-income levels can be built: the i X 1 zone. But the zone doesn’t cover all of Skid Row, it squeezes affordable housing into the blocks East of San Pedro: between Alameda and 5th and 7th street. We want the expansion of the i X 1 zone to the existing Skid Row neighborhood boundaries: from Main to Alameda, and from 3rd to 7th street.

May 25, 2021 – WOMEN IN SKID ROW
A group of engaged Women in Skid Row (WISR) wrote an letter and submitted an Amicus Brief in response to the lawsuit against the City and County of Los Angeles by Judge Carter and the LA Alliance for Human Rights.

The Honorable Judge David O. Carter, LA Human Rights Alliance, and the City and County of Los Angeles:
We represent a collective of advocates for the unhoused people of Skid Row, and we are extremely troubled by the consequences for our community should the Court’s injunction be implemented. Despite purporting to be an attempt to combat the circumstances created by historical racism, displacement, and houselessness, especially for bodies of color, this injunction reads like the blueprint for white supremacy and systemic racism. Read the entire letter here.