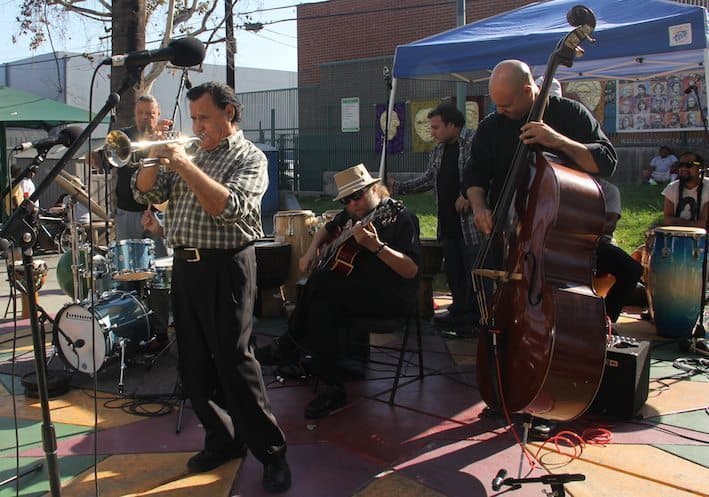 Saturday, May 2, 2015: 1st RENT PARTY featuring Skid Row’s own Alex Rodriguez Quartet and Prof. Kenneth Marcus from the University of La Verne who will touch on the history of Rent Parties, which developed during the Harlem Renaissance, and discuss the music scene on L.A.’s Central Ave. during that time.

Los Angeles Poverty Department is pleased to announce a series of rent parties to be held at the Skid Row History Museum & Archive, celebrating the history of the arts in Los Angeles and art as a tool for survival. LAPD’s series of rent parties will feature local scholars speaking on various aspects of L.A.’s Jazz Age history. Rent parties developed during the Harlem Renaissance as a means for black tenants in the area, often targets of discriminatory rent pricing as well as low wages, to make ends meet. These events centered around living room concerts and were known to feature such luminaries as Fats Waller. In keeping with the cultural history of rent parties, LAPD’s events will also feature food, drink and live jazz. Admission is by donation ($15 suggested), with all proceeds directly supporting the museum.

Our first party will feature Dr. Kenneth Marcus, a musician and a historian at the University of La Verne, where he also chairs the International Studies program. As a cultural historian, Marcus has written primarily on arts and culture in Southern California, as well as on the state and arts patronage in early modern Germany and Switzerland. His most recent book is Musical Metropolis: Los Angeles and the Creation of a Music Culture, 1880-1940 (Palgrave Macmillan). Marcus will put the rent party into historical context and explore often overlooked connections between L.A.’s vibrant Jazz Age art scene and the Harlem Renaissance.

Post talk, Skid Row’s own jazz band the Alex Rodriguez Quartet will perform for the crowd, who’ll be encouraged to meet and mingle as food and drink is served. The Alex Rodriguez Quartet has performed at LAPD’s Festival For All Skid Row Artists, among other venues, and an excerpt from their performance is available on YouTube: https://www.youtube.com/watch?v=BMDRutxht-0. Each October, the Festival for All Skid Row Artists showcases the diverse range of talents hidden on L.A.’s Skid Row.