A series of conversations by and about people who have done incredible things for Skid Row.

February 20 @ UCEPP – Jeff Dietrich from the L.A. Catholic Worker Reads from his Book “BROKEN AND SHARED”.
Celebrate the publication of Jeff’s book about his 40–plus years of service and activism in Skid Row. 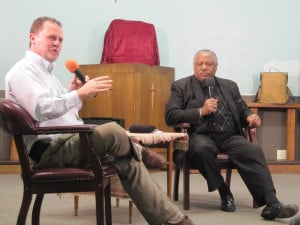 In 1988 Pastor Scott Chamberlain founded the Central City Church of the Nazarene, not a rescue mission, but a community church for the permanent residents of downtown. At the same time, Pastor William Campbell initiated Project Open Door, a drop-in center at 5th and Town that took shape by giving institutional backing to the needs and aspirations of Skid Row residents. Campbell and Chamberlain talk about listening to the community as the touchstone of their work.
Project Open Door was a project of the Los Angeles Second Baptist Church. William Monroe Campbell is currently pastor of Mount Gilead Missionary Baptist Church. Scott Chamberlain is the Executive Director of the San Gabriel Valley Housing and Homeless Coordinating Council. Tony and Lucy Stallworth who started the Karaoke Coffee Club at the Central City Community Church and Scott Chamberlain and William Monroe Campbell are all commemorated because of their contributions to knitting the social fabric of Skid Row.
Los Angeles Poverty Department started the evening with a 20-minute preview performance of WALK THE TALK. The event is produced by LAPD and the Central City Community Church of the Nazarene and hosted by the church’s current Pastor Tony and his wife Lucy Stallworth. 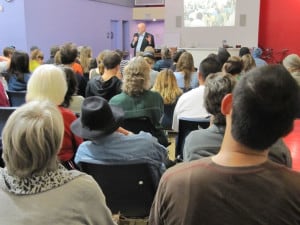 A conversation with Nancy Mintie, Gary Blasi, Pete White and You, the audience, about the ongoing struggle of Skid Row residents for social justice.  A slide presentation documenting historical grassroots actions will punctuate and animate the discussion.

27 years before Occupy, there was Tent City. In 1984, The Homeless Organizing Team put up circus tents and housed 400 people across the street from LA City Hall, while demanding housing and jobs for LA’s homeless population.  The protest brought worldwide attention to the exploding problem of homelessness.  The Homeless Organizing Team was made up of Skid Row residents and staff and volunteers from the Inner City Law Center and the Catholic Worker.
In 1980 Nancy Mintie founded the Inner City Law Center and brought the first free legal services to the people of Skid Row.

1980’s Legal Aid Foundation of Los Angeles, staff attorney Gary Blasi, worked with Mintie and a battery of public interest lawyers from throughout Los Angeles to bring huge positive changes to the lives of all homeless people in Los Angeles County. In 1999, Pete White founded the LA Community Action Network. LA CAN has successfully organized neighborhood residents to resist displacement and the Safer Cities Initiative. Blasi, now a professor of law at UCLA, continues to work on Skid Row issues often in collaboration with LA CAN.
LAPD started the evening with a 15-minute performance about Harry Rodgers, a community activist who is commemorated in WALK THE TALK. The event is produced by the Los Angeles Poverty Department and the Otis College of Art and Design, Integrated Learning program.

Artists Lillian Abel Calamari, OG Man, Robert Chambers, SS Jones, Hayk Makhmuryan and Bob Bates show their work and talk about the history of the rich creative community that exists on Skid Row and where we are today.

Lillian Abel Calamari is a talented painter and a remarkable social worker with SRO Housing Corporation. In 1992 she initiated an art workshop open to all Skid Row residents, initially at the Saint Vincent de Paul shelter and later at SRO’s James Wood Community Center and currently in its own studio provided by SRO at the Rivers Apartments.
Manuel Compito (aka OG Man) a L.A. native and artist, has devoted his creative energy to spreading a self-help philosophy. His OG’s N Service Association uplifts the men and children of Skid Row with events like Father’s Day in the Park, brings painted trash cans to the neighborhood with the Funky Trash Can campaign and in 2007 he launched the highly successful 3-on-3 Basketball League at Gladys Park.
Robert Chambers served for eight years as president of the Homeless Writers Coalition, which was founded in 1988 by Dino Lewis, London Wright, Southern Comfort and others.

The Coalition has produced numerous readings, live theater, a CD and a newspaper.
S.S. Jones, a professional blues guitarist, S.S. Jones and Bill Edwards organized the Skid Row Musicians Network in 2000. The Network produced monthly free concerts at San Julian Park and the Leonide Hotel, with members performing in exchange for rehearsal space.
Hayk Makhmuryan is the coordinator of Lamp Community’s Fine Arts Program. The program has nurtured and exhibited the work of many wonderful visual artists.
Bob Bates, currently the Artistic Director, Co-Founded Inner City Arts in 1989, an art space where at-risk children explore their creativity, learn and grow.
The event is produced by The Los Angeles Poverty Department and hosted by Inner City Arts. LAPD started the evening with a 15-minute in-progress excerpt from WALK THE TALK. Lillian Calamari, OG Man, SS Jones and Robert Chambers are among those commemorated in the plaques.

A conversation with Darlene Berry, SRO’s first female hotel manager, who as the director of SRO’s two parks, started Recovery on the Frontline with Mike Dolphin; Redd, drug treatment councilor for Behavioral Health Systems, Orlando Ward, VOA and Midnight Mission executive staff member, about recovery and the creation of the Biggest Recovery Community Anywhere on Skid Row. All three panelists have lived in the Skid Row community.

May 23 @ The Last Bookstore – Conversation & performance: Creating Community from the Ground up on Skid Row.

Far from being a societal wasteland, Skid Row, Los Angeles is a long standing endangered low-income residential neighborhood and the only answer in the entire region for problems of homelessness and recovery. Tonight’s panelists have lived and worked in the Skid Row community across three decades and have stood up for the community and launched transformative community building initiatives on Skid Row. They will talk about the vitality of the community and their successes in empowering the community.
Mollie Lowery co-founded and for 20 years directed Los Angeles Men’s Place, the first day center for homeless men with mental illness. She expanded LAMP to include housing and employment opportunities for women as well as men. Mollie introduced the “housing first” approach of helping the homeless mentally ill in Los Angeles and she continues this work today. In 2007 Lowery started to serve the mentally ill homeless outside of Skid Row. 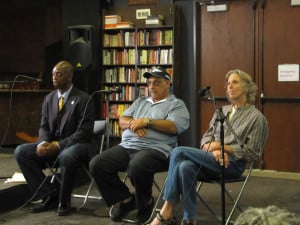 Mike Neely is the founder and past director of the Homeless Outreach Program/Integrated Care System. The Homeless Outreach Program was founded in 1988 as a pilot program that hired formerly homeless people to connect homeless people with services that they wanted and needed.  HOP grew into a multi-million dollar project with more than sixty employees. Neely is currently a commissioner of the Los Angeles Homeless Services Authority, LAHSA. He served on the State Commission on Homeless Veterans, the State Commission on African American Males and Substance Abuse.
General Jeff Page is a new generation of Skid Row leaders. In 2007 he founded Issues and Solutions, to directly address a variety of quality of life and community planning issues. General Jeff brings s to the attention of local government issues that require their attention and he initiates direct solutions to community problems. With Manuel “O.G. Man” Compito, General Jeff created “Operation Facelift/ Skid Row”, a “grass roots” community effort that focuses on cleaning up the trash and debris in Skid Row and replacing it with murals. General Jeff is a member of the Downtown Neighborhood Council.