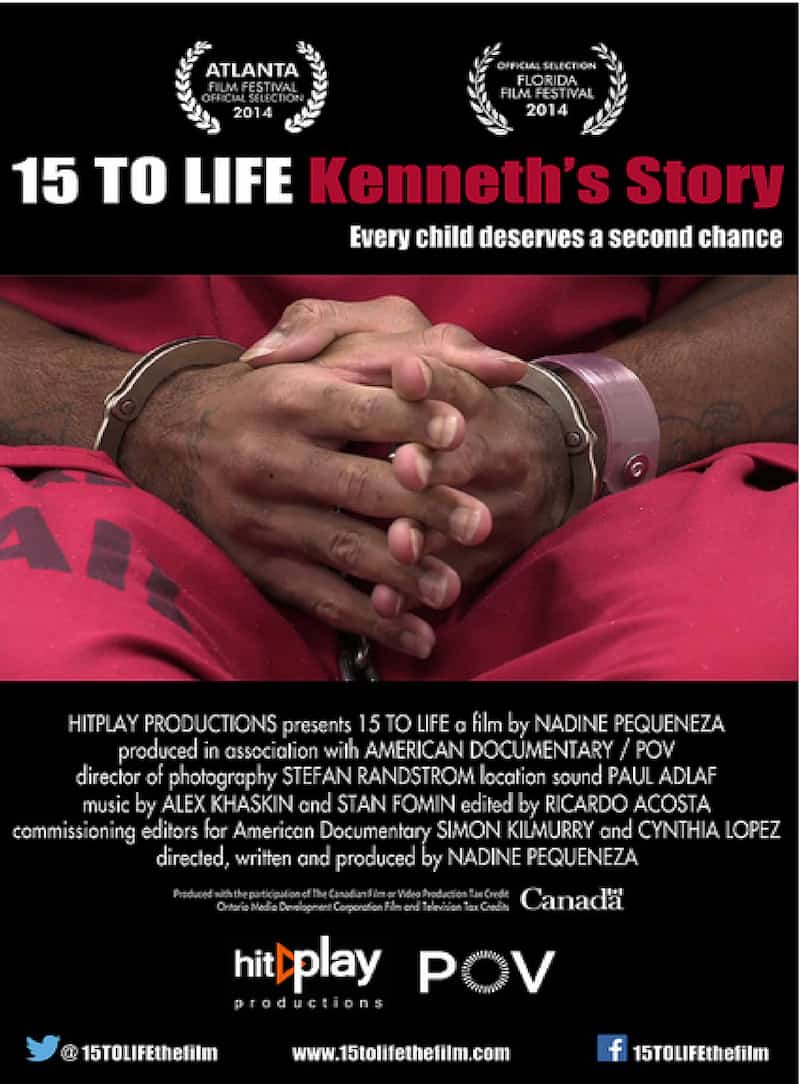 15 to Life – A film by NADINE PEQUENEZA

15 TO LIFE: KENNETH’S STORY is a story of redemption that goes to the heart of why children cannot be treated as adults before the law. Eleven years ago Kenneth Young received four life sentences. He was 15 years old. The United States is the only country in the world that routinely condemns children to die in prison. This is the story of one of those children, now a young man, seeking a second chance in Florida – one of the most punitive states in the country.

For over a decade Kenneth believed he would die behind bars, until in 2010 the U.S. Supreme Court ruled life without parole sentences for children who haven’t killed unconstitutional. In Tampa, Florida we follow Kenneth Young’s legal battle for release. Recruited by his mother’s crack dealer to rob hotels, Kenneth needs to prove that he is rehabilitated and that the judge who sentenced him to life was wrong to throw away the key.

15 TO LIFE weaves the unfolding story of Kenneth’s resentencing with the story of his difficult childhood, and the circumstances that lead to a 30-day crime spree that changed his life forever.  Of the more than 2,500 children sentenced to life in prison, Kenneth’s story is both exceptional and universal. Like most children who receive death-in-prison sentences, Kenneth is African American, indigent and neglected. What makes his case extreme is the brutality of his punishment – four life sentences for armed robberies in which no one was injured.

Kenneth’s story is a powerful testament to a child’s remarkable capacity for change, and a stinging indictment of a penal system that has condemned thousands of children to die in prison. It has the dramatic power of a trial narrative, and the unique perspective of the condemned.

Based in the Skid Row neighborhood since 1985, Los Angeles Poverty Department (LAPD) is the first ongoing arts initiative on Skid Row, a non-profit arts organization that connects lived experience to the social forces that shape the lives and communities of people living in poverty.  LAPD creates performances and multidisciplinary artworks which express the realities, hopes, dreams, and rights of people who live and work in L.A.’s Skid Row.  LAPD has created projects with communities throughout the US and in The Netherlands, France, Belgium, and Bolivia.

The Skid Row History Museum & Archive operates as an archive, exhibition, performance and meeting space curated by LAPD. It foregrounds the distinctive artistic and historical consciousness of Skid Row and functions as a means for exploring the mechanics of displacement in an age of immense income inequality, by mining a neighborhood’s activist history and amplifying effective community strategies. Exhibitions focus on grassroots strategies that have preserved the neighborhood from successive threats of gentrification and displacement, to be studied for current adaptation and use. Skid Row History Museum & Archive programming is made possible with the generous support of The Andy Warhol Foundation for the Visual Arts.